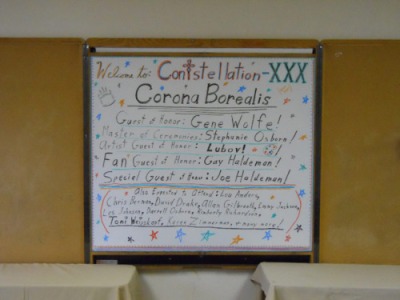 On Friday afternoon I picked up my convention badge. Somehow the spellings never quite seem to work out for me. But the alternatives always sound cooler than my real name.

Gay and Joe Haldeman were an awesome duo. Gay handled panels with deftness and wit and humor. Lubov kept appearing near me at random times during the convention, always wearing beautiful skirts and tops that seemed like she had plucked them from her paintings.

And Gene Wolfe! He was delightful. He told wonderful stories and anecdotes on the panels, and a few in the hallways too. He gave a reading from his current project,The Land Across.

On the last day of the convention, there was an author signing. I had brought my copy of The Fifth Head of Cerberus. I’d been trying to work up the courage to talk to him all weekend.

He asked me if it was my copy, and he said it was in wonderful condition for such an old edition. He signed my copy of his book, and I gushed for a minute about how much I liked his writing.

Yay Gene Wolfe! I’m so glad I had the chance to meet him.

Con*Stellation also had a nice Art Room. There were probably twenty or so artists that had art for sale. They had a great range of art, from amigurumi cthulhu to an original painting by Lubov.

There was an amazing Martian landscape, “Oasis on Mars”, by F.R. Amthor. I made the mistake of waiting to buy it. On Sunday morning I came to the con ready to take it home, but someone else had purchased it.

There was one print that I fell in love with and bought right away (presented here by Furball):

There’s a little card in the corner of the print that says, “It brings a tear to their eyes to see The Big Guy stomp Tokyo”. I love the wistful look in the dragon’s eyes, and the cunning in the cat’s.

Each year the convention has a kind of patron saint constellation. This year it was the Corona Borealis. The t-shirt art is done by the same artist every year, and it is a tradition for regular con-goers to wear the t-shirts of Con*Stellations past. One of my favorite past-con t-shirts was an aquamarine shirt with Delphinus.

In the dealer room, I successfully kept myself from buying a Star Trek plate painted with the Enterprise sailing into a nebula. I don’t have a good place to display it at the moment without the fear of a cat knocking it over. But someday I will have a china hutch with a few antiques I have inherited. And some Star Trek plates. It is going to be awesome.

I learned how to play the Eleminis  card game, and bought a set to play with my brother. I bought a copy of Tales from a Goth Librarian from Kimberly Richardson. And, I bought these:

Con*Stellation was a great small convention. There weren’t so many people there that I got overwhelmed with agoraphobia (well, except for once during the Friday night mingle session where everyone was in a small room). And the Guests of Honor were always visible hanging out at the panels, in the hallways, on the sofa in the lobby. I talked to some people I had never met before and came away feeling a recharge in my sense of science fiction community.

My dream is to go to the World Fantasy Convention within the next few years, but whether or not I can go, I’m glad that I’ll be able to attend my extremely awesome local science fiction convention. My many thanks to NASFA for all of the great work they did to make the convention happen!