Whenever I reveal my Southern heritage to people, they usually do one of three things:

1. Start singing “Sweet Home Alabama”
2. Ask me to speak in a Southern accent
3. Ask me to tell them odd stories of the South

I’ve never had a Southern accent. I’m not sure why. Most of the Southerners I know who don’t have accents are usually ones who read a lot when they were kids. Maybe having all of those words go straight from page to mindspace set up a kind of accent-barrier. The best I can do at a Southern accent are an occasional “might could” and every now and then, and when I’m speaking to Southern strangers, a “ya’ll.”

Since doing a Southern accent is off the list, I’d like to share some beautiful, awesome Southern strangeness – places and people and objects that are uniquely Dixie.

Earlier this week I went with my family to the Unclaimed Baggage store in Scottsboro, Alabama. When you lose your luggage while traveling, your stuff comes here. It’s kind of like a thrift store, only it is full of items that people didn’t want to give away. So instead of tatty sweaters and broken toys, you get expensive jackets and eReaders. And then you also get a few treasures, things that were never meant to be lost. 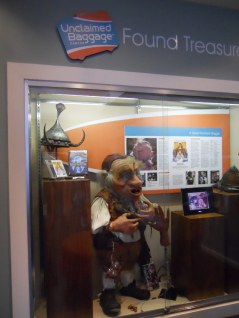 I visited Hoggle for the first time many years ago. His face was damaged. It looked like the skin had rotted away around his nose and mouth. An entire cheek was missing. He was encased behind thick glass, the small frame of his body looking empty and withered. But he was Hoggle, Sarah’s friend in the Labyrinth, who gave her the poisoned apple, then repented and helped her storm Goblin City.

Since then Hoggle has been repaired. But I rather liked the old, tattered Hoggle better. I mean, that’s kind of who his character was, anyways. Someone who has lost even the tiniest chance of friendship with others. A person who is hollowed out, decaying within, meets a stranger and decides to fight for her.