Here at the little apartment in north Alabama, we’re done with our viewings of Star Trek: The Next Generation Season One, and are well into Season Two.

The second season began with a horrible mindscrew for Deanna Troi, where she was forcefully impregnated by an alien life form. The next episodes began to get better and better, thank goodness. We got to see Riker as the cultural-savvy vagabond he is at heart in “A Matter of Honor” when he joins the crew of a Klingon vessel as part of an exchange program. This was immediately followed by the best Star Trek TNG episode so far – “The Measure of a Man”, where a court decides whether Data has the legal right to decline an operation which would very likely erase the essence of his self. But after this episode, the stories took a nosedive again. We watched “Samaritan Snare” last night, and it was tedious and boorish.

There are times when I feel the burning desire to skip the poorly rated episodes. To just toggle past them on the menu screen when my partner says, “Oh, I read that this one is one of the worst episodes ever.” But I’ve watched them all. Every moment of techno-jargon, of A and B plot lines that never intersect, of Riker’s father in a too-tight onesie.

But I’m glad I stuck it out, because I was able to watch a fascinating character development in one of the Enterprise’s new crew members.

[ At this point, I suppose I should alert you to spoilers about Star Trek: TNG second series episodes. I’ll only be referencing a few episodes, but in order to talk about Pulaski’s character arc I need to reveal the endings. So proceed with caution. ]

At the beginning of Season Two, we learn that Dr. Crusher won’t be journeying forward with the Enterprise. She’s been given another assignment. This creates two problems:

(1) Without Dr. Crusher on board, Wesley Crusher becomes 100x more annoying. His plausibility for remaining on the starship after his mother has left is non-existent, and Riker gets shoved into being Wesley’s guardian.

Dr. Beverly Crusher may not have been the greatest physician in the world, but she was likable as a character. Sure, her “will they or won’t they?” chemistry with Picard was only 1/6 of a Mulder-Scully, but she and Picard had a past together. They had friends and coworkers they knew in the larger world of Starfleet that made the often flimsy plots of the first season feel more like stories. And I admired her ability to coach Picard through taking care of her injuries as she slipped into shock after falling into a giant hole on a hostile planet. She often seemed flabbergasted by medial traumas, but she always came through in the end.

In the first season I scoffed at the notion that Wesley Crusher was annoying. I loved “Coming of Age,” where Wesley takes his first try at the Starfleet Entrance Exam. Maybe he’s made humbler somehow just by us knowing that his mom is on board the ship. But with Dr. Crusher gone, Wesley turns into a bit of a third wheel. Since it is awkward for him to stay there after his mother is no longer acting Chief Medical Officer, his every action is open for speculation. “Why are they letting him take charge of a geological survey team? He’s not even supposed to be there!”

So replacing Dr. Crusher was a bit of a conundrum. How do you go about replacing a main cast member in a way that fans will not reject? This happens all the time in long series. Mulder disappeared and was usurped by liquid Terminator guy. Samantha had two Darrins.

You can either have a new character replace the position held by the old character (X Files), or you can place another actor in the character’s role and hope no one notices (I Dream of Jeannie) or make fun of the change (a la Roseanne) so that no one cares.

Thankfully, Star Trek: TNG chose to create a new character to fill the role of Chief Medical Officer, and  whether by luck or by design, the writers at Star Trek: TNG pulled this transition off gloriously.

This is how they did it.

STEP ONE: MAKE THE AUDIENCE HATE THE NEW CHARACTER

How do you do this swiftly and effectively? You give that new character a prejudice, a flaw so unappealing that you did not think it possible in the story’s universe.

In a word: bigotry.

In the first season we learn a lot about Mister Data. He’s the most capable person on the Enterprise. He has a drive to become as human as possible, and his attempts to become more human are heartbreaking, annoying, and funny. (Like the time he tries to sport a Riker-beard). They’re complicated, because he’s a complicated, self-aware being.

But Pulaski will have none of this. She’s a medical officer. Her jurisdiction is the human body. When she meets Data, she refers to him as “it.” Pulaski constantly questions Data’s abilities to reason, to feel empathy, and even to die.

From watching the first season, I thought everyone in the 24th century was enlightened and accepting of alternate life-forms. But it seems as though the Enterprise is a bit of a protective bubble for Data, and that there are people out there – like Dr. Pulaski – who view Data as nothing more than a collection of mechanical parts.

After two episodes of Data-bashing, my dislike of Dr. Pulaski was cemented.

And then she almost died.

The key in this near-death experience is the method of how the character falls into the deadly situation.

For Dr. Pulaski, it is her drive as a Medical Officer that pushes her to take a risk.  On the planet below,  the adults are rapidly aging. The children are genetically modified, and are kept in a contained facility apart from the adults. The children show no signs of the rapid aging disease. The lead scientist appeals to Dr. Pulaski to save their children, and Pulaski, being thorough, takes a shuttle craft away from the Enterprise and beams the child there in order to conduct a physical exam. This exam will tell her whether it is safe for the children to beam aboard the Enterprise so that they can be taken care of when all the adults die from the disease down on the planet.

The exam goes well until – ARTHRITIS! Dr. Pulaski grabs her arm, and hails Picard. The children are contagious. Dr. Pulaski’s caught the rapid aging disease. She’s going down to the planet to see how she can help them now that she’s infected. 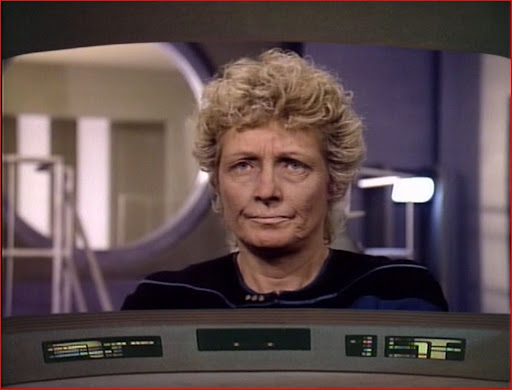 She begins to age, but she works steadily on towards trying to find a cure. She takes full responsibility for her actions, and despite my frustration at her treatment of Data, I begin to feel sympathy for her. And I start to understand how it is possible, maybe, for a person so dedicated to the art of healing the human body to feel umbrage at an android, whose body is alien to her.

STEP THREE: EASE OFF THE BIGOTRY AND SHOW THE CHARACTER’S UBER-CAPABLENESS
Mister Data was on that shuttle craft with Dr. Pulaski. And he points out to her that it is not certain that he will remain unaffected by any contagion. In other words, he could die, too. Maybe this shared near-death experience with Data clicks some gears in Pulaski’s brain, because pretty soon she backs off her admonitions of his non-personhood. Perhaps she just becomes less outspoken about her beliefs, but she certainly begins to treat Data with more respect.

The final step in establishing Dr. Pulaski as an accepted member of the crew is when she saves Picard’s life. This happens in the amazingly awful episode “Samaritan Snare”. One I would rather not have watched. But I’m glad I did because this is when I knew Dr. Pulaski had truly arrived. And I forgot all about Dr. Crusher.

Picard has an artificial heart. It’s not working properly, and he needs a replacement. He takes a painfully long shuttle journey with Wesley to a starbase while the Enterprise is off being boorish without his command, all because Picard is afraid that if Pulaski performs the operation then word will get out and the crew will no longer respect him.

For some reason the surgical staff wear all red scrubs on the starbase. We see Picard slip off into anesthetic bliss from a tiny piece of metal stuck to his forehead, and then the lead surgeon declares they’ll all be home in time for supper.

The lasers won’t keep stuff together.

Everybody starts sweating on their foreheads.

Lead surgeon guy calls in a specialist. The specialist says they have to take the artificial heart out and do the procedure again.

Lead surgeon guy freaks out. “I’m not qualified to do that.”

But he knows someone who is.

The Enterprise hits Warp 9 back to the starbase, and Picard wakes up to a familiar face.

Picard: What the hell are you doing here?

Picard: Oh, come on. This is a routine procedure, quite commonplace.

Pulaski: True, but you are not a commonplace man. You’ll be out of recovery in four hours.

Picard: I didn’t want you involved in this.

Picard: If you’re here the entire crew must know.