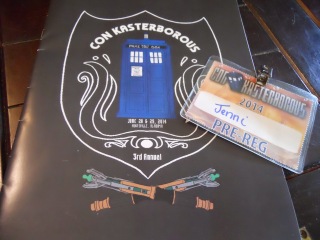 I had never been to a single-fandom convention before, so I wasn’t sure what to expect from Con Kasterborous, Huntsville’s Doctor Who convention. I knew I could fill a whole weekend with Star Trek or writing, but while I like Doctor Who, I wouldn’t put down Whovian as my number one area of geeking out.
I didn’t need to worry – Con Kasterborous was an amazingly fun convention, with terrific guests, great vendors, and wonderful cosplayers. I loved the focus on one Doctor. By the end of the convention, I felt like I had taken a very fun and hands-on seminar on television history.
There were so many wonderful cosplayers there, from the cyberman and weeping angel to the Doctor’s scarf.
The convention was a celebration of the 7th Doctor, played by Sylvester McCoy. Andrew Cartmel, the script editor during the 7th Doctor’s run, was an excellent guest. It was wonderful to hear them chat about the episodes.
I had heard that McCoy was a great doctor, and that he had a pretty cool companion, Ace. But it wasn’t until I picked up the flyer for Con Kasterborous that I started watching the 7th Doctor episodes.
If you’re interested in the 7th Doctor, then read this overview of which episodes to check out by Rachel Hyland on Tor.com. I agree with the reader comments that suggest “The Curse of Fenric” is important and a pretty great episode. (It is also one of the only ones available on Netflix/ Amazon Prime at the moment). The Doctor is scarily powerful, and does some questionable mind-f**kery that I think makes his character extremely interesting and unknowable – which for me are qualities at the heart of an amazing Doctor.
I decided to do my first ever convention cosplay, and I had so much fun dressing up as Ace. (Come back next week for a post about how I made my Ace costume!)
Sylvester McCoy was such a wonderful convention guest. He was witty and irreverent during the panels, but also exceptionally kind to timid audience members asking questions. In between panels and photo sessions, he had a table in the hallway where people could get autographs and take selfies with him. He played the spoons for a child in a stroller, cuddled with a puppy, and commandeered a luggage cart as his personal transport through the lobby.
If you get a chance to see Sylvester McCoy, take it.

Across the hallway from Sylvester McCoy, script editor Andrew Cartmel had a table where he sold copies of his book, Script Doctor: The Inside Story of Dr. Who 1986-89. Cartmel was an amazingly welcoming guest. Every time I walked by the table there was a convention attendee sitting beside him – behind the table – just hanging out and talking with him. I bought his book, which came with five limited edition photograph prints of his time working with Doctor Who.
The book is full of great stories, and he shared a few of them during his panel. You can watch it here. 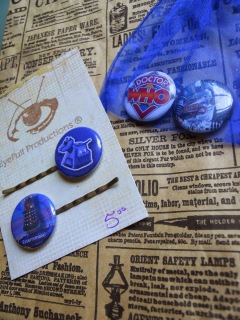 There were so many great vendors. Eyefull productions had a ton of cool buttons to choose from, and some really lovely tardis jewelry.
I think Sweet Geek may be my favorite geek artist ever. She had buttons, cards, bookmarks, and prints of tons of characters from my favorite movies and television shows.
Who could say no to this? 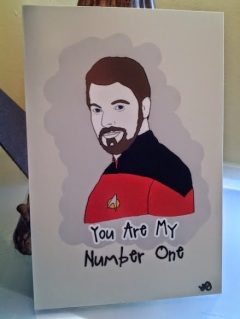 The volunteers and staff of Con Kasterborous were beyond awesome. From the friendly security staff that chatted with me while I waited in line at registration, to the upbeat volunteers who kept my plastic bat safe everytime I left the hotel to go seek food or coffee in the shopping area outside, to the people who ran and organized the convention and were patient and kind with worn-out congoers – these people made the convention a huge success. Many, many thanks to them for making my convention experience so great.
If you want to see more videos and photos from the convention, check out the con wrap-up page for some excellent links.
Con Kasterborous, from what I hear, gets bigger every year. I’m looking forward to going again, but I need to watch the movie first.