When I found out that Sylvester McCoy would be in town for our local Dr. Who convention, I knew I wanted to try to dress up as Ace, his companion.

Ace is a kick ass partner for the doctor. She’s a chemistry whiz, and uses her abilities to make an explosive she calls Nitrus 9. She’s brilliant, a punk,  enthusiastic, and friendly to everyone she runs into on her time journeys.

I knew if I wanted to make an Ace outfit, the most important element would be her jacket. Collecting (or sometimes handmaking) all of the patches and buttons from Ace’s jacket can be a lengthy task. I knew I wouldn’t have my jacket screen-accurate in time for the convention, but I decided to go ahead and try my best.

I found some nice red felt and a white fabric in the remnant bin at the local craft supply store, and I picked up one square of yellow felt from the craft section.

I had printed out a collegiate style “A” to use as a stencil, but when I held it up to my jacket it was much too small. So I just free-handed the “A” and the accompanying “ce” – sketching the letters out on paper, then cutting the paper, then using that as a stencil on the felt, and finally cutting out the felt letters. 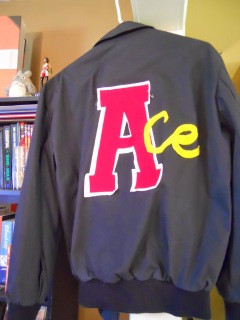 The front and arms of the jacket were a bit harder to recreate accurately. Luckily, several of the patches that Ace uses are from NASA, and living fifteen minutes from the U.S. Space and Rocket Center came in very handy. I was able to get two of the main patches on the front of the jacket, so that I felt as if I were at least on the right path to having a true Ace jacket someday.

But there were still many empty spots on the jacket I would not be able to fill with the correct buttons or patches.

So I made a decision that took away a ton of stress and let me have some fun with the outfit. I pulled out my tin of buttons I have collected over the years, and I chose a few to go on the jacket. If Ace were making this jacket today, what kind of things would she put on her jacket now? I have a button from a punk band I saw in college, the creative commons logo,  and at the con I added a button with the 7th Doctor. It isn’t screen-accurate, but I feel like it is still true to the character of Ace.

One of the obstacles I ran into was the weather. Our convention was held in June. In Alabama. So there was no way I would be able to actually wear the jacket during the convention.

Here’s where having a backpack comes in very handy. Backpacks are excellent to have at conventions in general, and if you can work them into your cosplay, then you’ve fed two birds with one scone.

Ace uses a backpack to carry all of her Nitrus 9 and to store her baseball bat when she isn’t using it to bash in Daleks.

My jacket had a tiny loop at the inside neck, so I used a carabiner to attach my jacket to my backpack. It worked out perfectly.
Since I didn’t have time to get many of the buttons and patches for the jacket, I wanted to step up my game a little by recreating Ace’s shirt that she wears in the episode Remembrance of the Daleks.
Two elements make this shirt very easy to recreate:
(1) It looks like it is hand painted. So – excellent! You, too, can hand paint this t-shirt and it won’t look awkward.
(2) It is kind of crazy-funky-cool, so as long as you get the general feel of the shirt, it will be recognizeable.
Having this t-shirt was great, because people could still tell I was cosplaying even though I wasn’t wearing the jacket. And the people who knew who Ace is loved it.
I had thought there would be a legion of Ace cosplayers, since Sylvester McCoy was the Guest of Honor. As I bopped around town buying supplies for my outfit, I imagined at least one other Ace right in front of me. She was the one who had bought the red felt fabric. She was the reason there was some in the remnant bin. There was only one silver plastic bat at the superstore – she must have bought the other one.
But when I walked into the convention most of the cosplayers were from the most recent episodes of Dr. Who. No Ace’s in sight. There were a few people dressed as older Doctors, including a very cute kid with celery in his breast pocket.
It wasn’t until we headed to lunch at a nearby restaurant that I ran into the only other Ace cosplayer at the convention.

If you haven’t cosplayed before, you may worry about running into someone with the same character as you.
Don’t.
This person is going to be one of your favorite people you’ll speak to all weekend. (Well, supposing they are nice.)
This Ace cosplayer had an amazing jacket. She had most of the buttons and badges, and had some witty substitutions for the harder to find items. Instead of the Blue Peter badges, given only to children in the UK that appear on a children’s television show, she had a button that said “I never earned my Blue Peter badge.”
This cosplayer wasn’t my imagined one (her jacket used a different material for the “A” instead of the red felt), but hanging out with her and talking about Ace, and our different quests to make an Ace cosplay, was one of the highlights of the convention for me.

This was my first time cosplaying at a convention, and I had a blast. Dressing up as one of your favorite characters is such a great way to meet new people. Even if you’re shy, go ahead and try it sometime at one of your local conventions. I bet you’ll start thinking about your next cosplay as soon as that convention is done.